back to
all honorees 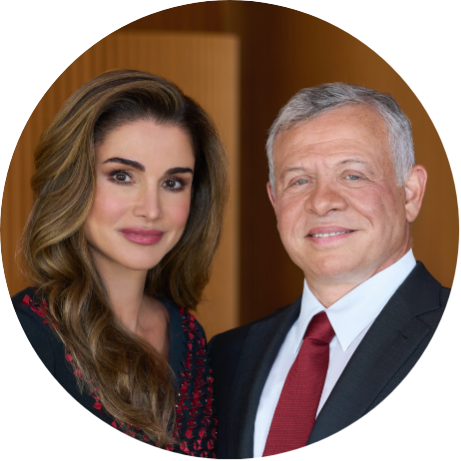 back to all honorees

of the Hashemite Kingdom of Jordan

His Majesty King Abdullah II of Jordan pursued a distinguished military career before ascending to the Throne in 1999.

King Abdullah II has launched and supported several initiatives that promote intra- and inter-faith harmony and peace around the world, such as the “Amman Message”, “A Common Word”, and the annual UN World Interfaith Harmony Week.

In recognition of his efforts to promote peace, spread interfaith harmony, and safeguard Islamic and Christian holy sites in Jerusalem under the Hashemite Custodianship, King Abdullah II has received several prestigious awards, including the Peace of Westphalia Prize, the Templeton Prize, Italy’s Lamp of Peace of St. Francis, and the Scholar-Statesman Award from the Washington Institute for Near East Policy.

An active humanitarian, Queen Rania Al Abdullah of Jordan has dedicated much of her career to improving the lives of Jordanians by supporting efforts to create opportunities for their advancement.

She has worked extensively to enhance education and empower women and children, and drive innovation, technology, and entrepreneurship through society.

Internationally, Queen Rania is an advocate for tolerance, compassion, and promoting empathy between people of all cultures and backgrounds. She has spoken widely on fighting stereotypes of Arabs and Muslims, and has worked to foster greater understanding between people of different faiths and cultures. She is also a champion for refugee rights and aspirations around the world.