back to all news
Judging Panel of Zayed Award Human Fraternity Holds Its 1st Meeting in Rome
Abu Dhabi, UAE 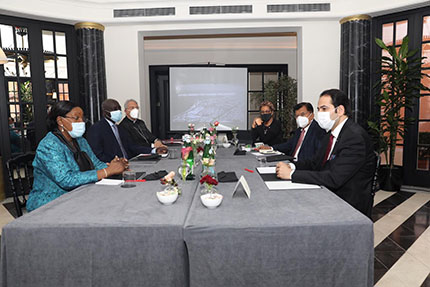 The Judging Panel of Zayed Award for Human Fraternity convened its first meeting in the capital city of Italy, Rome. The meeting aimed to discuss the judging mechanisms the panel will follow until announcing the winner in January 2021.

The meeting discussed the rules and criteria of the nomination for the award, which includes providing the opportunity to nominate all personalities and institutions that have made significant contributions to the service of humanity from around the world. The HCHF announced last Monday, October 19, its call for nominations for the second round of the award. It is the first time that it is possible to submit applications for nomination for the award since it was conferred in its first round on His Eminence the Grand Imam of Al-Azhar Al-Sharif, Prof. Ahmed Al-Tayyeb, and His Holiness Pope Francis, Head of the Catholic Church, in Abu Dhabi in February 2019, to recognize their role in the signing of the Document on Human Fraternity (DHF).

The members of the Judging Panel of Zayed Award for Human Fraternity lauded the DHF, stressing its significance for the entire humanity, especially in light of the challenges and crises the world is going through. They also commended the efforts made by the HCHF to promote the culture of coexistence, in addition to its initiative to support the award and set neutral criteria for its awarding. The Judging Panel members expressed their appreciation for the UAE’s keenness to support the efforts aimed at realizing the objectives of the DHF.

For his part, Judge Mohamed Abdelsalam said that Zayed Award for Human Fraternity, which has been inspired by the historic Document on Human Fraternity, will continue to strengthen the joint efforts for the good of humanity. He further added that the award shall be an annual international platform for those who have passion for coexistence and peace all over the world, noting that the award will be delivered to the winner in prestigious annual ceremony to be held on the anniversary of signing the DHF.

According to the statute of the award, the Judging Panel of Zayed Award for Human Fraternity shall consist of five members in addition to the secretary-general of the HCHF. The five members are: Catherine Samba-Panza, former President of the Central African Republic, Michaelle Jean, former Governor-General and Commander-in-Chief of Canada and former head of the International Organization of La Francophonie, Muhammad Jusuf Kalla, former Vice-president of Indonesia and chairman of Indonesian Red Cross, Cardinal Dominique François Joseph Mamberti, Prefect of the Supreme Tribunal of the Apostolic Signature in the Vatican, and Adama Dieng, former UN Special Adviser on the Prevention of Genocide, in addition to Secretary-General of the HCHF Judge Mohamed Abdelsalam.