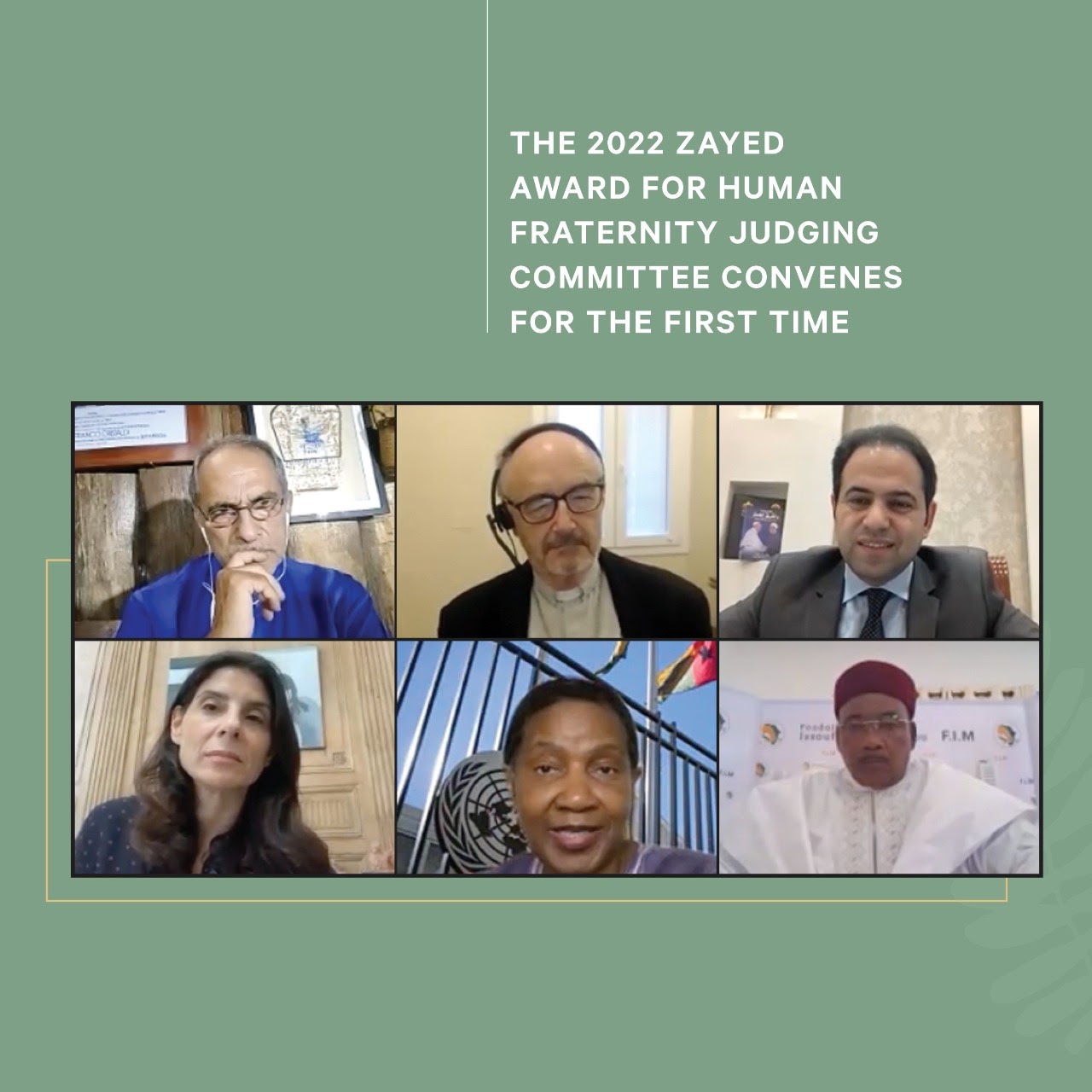 The first judging committee meeting of the Zayed Award for Human Fraternity 2022 was convened Friday, following the launch of submissions for the award, which recognizes individuals and entities who have made profound contributions to human progress and peaceful coexistence.

During the virtual meeting, former President of Niger H.E. Mahamadou Issoufou expressed his joy at being a member of the judging committee and said the “great responsibility” of the judging process can be guided by the example of late founder of the United Arab Emirates Sheikh Zayed bin Sultan Al Nahyan and the values of the historic Document on Human Fraternity, signed by His Holiness Pope Francis and His Eminence Grand Imam of Al-Azhar Professor Ahmed Al-Tayeb.

President of the Aladdin Project Leah Pisar expressed her “deep honor and humility” in being among the selected judges.

“At this key moment in history, the mission of this jury is all the more meaningful. I applaud the Award’s founders for seizing on this moment to help make a tangible difference where it matters most,” Pisar told fellow judges.

Judging committee member H.E. José Ramos Horta, a Nobel Peace Laureate and former President of East Timor, said he was pleased to join this global initiative that aims to promote human fraternity worldwide. He praised the model provided by East Timor and neighboring Indonesia, of promoting tolerance and fighting extremism.

Judging committee member and Under-secretary of the Migrants and Refugees Section of the Holy See Cardinal Michael Czerny said he looked forward “to cooperating with the committee to advance fraternity with all its human, social, and societal values,” and to start the judging process and review nominations, which close on December 1, 2021.

The HCHF, which presents the Zayed Award for Human Fraternity, is an independent international committee instituted to promote human fraternity values around the world and to fulfill the aspirations of the Document on Human Fraternity.

Chairman of the Department of Culture Abu Dhabi and HCHF member H.E. Mohamed Al Mubarak, President of the Pontifical Council for Interreligious Dialogue of the Holy See and HCHF member Cardinal Miguel Ángel Ayuso Guixot, and President of Al-Azhar University and HCHF meeting chairman Professor Mohamed Hussein Mahrasawi - attended the first Judging Committee meeting, welcoming the new judges of the Zayed Award for Human Fraternity 2022 on behalf of the HCHF.

On behalf of the Higher Committee, Cardinal Ayuso expressed thanksgiving to the Pope and Grand Imam of Al-Azhar for entrusting the HCHF “to promote and carry out, around the globe, initiatives to promote the values of human fraternity” including the Zayed Award for Human Fraternity.

Professor Mahrasawi expressed gratitude to the Judging Committee on behalf of the Grand Imam of Al-Azhar. He also noted that His Eminence the Grand Imam welcomes the global initiative of the Zayed Award for Human Fraternity, which aims to promote human fraternity values worldwide.

For his part, H.E. Al Mubarak said that His Highness Sheikh Mohamed bin Zayed Al Nahyan, Crown Prince of Abu Dhabi and Patron of Human Fraternity, fully supports the committee’s work and is keen that it carries out its mission with integrity and full impartiality. He further noted that the UAE supports all the human fraternity initiatives and feels proud of the fact that His Holiness Pope Francis and His Eminence Grand Imam Ahmed Al-Tayeb together have chosen Abu Dhabi to present the Document on Human Fraternity to the entire world.

Former Governor General of Canada Rt. Hon. Michaëlle Jean, a member of last year’s Judging Committee of the Zayed Award for Human Fraternity, was also in attendance. She called her time serving as a judge an “extraordinary adventure” and shared her experience with the new members. She commended the environment in which the former jury worked in 2021, noting that it helped the jury to identify the worthy recipients of the award. She also thanked the UAE for patronizing the Document on Human Fraternity, stressing the country as a role model, working sincerely for the sake of human fraternity and coexistence.

Judge Mohamed Abdelsalam, Secretary-General of the Higher Committee of Human Fraternity (HCHF) said, “The Judging Committee of the Zayed Award for Human Fraternity 2022 features a highly distinguished group of globally recognized influential personalities in promoting global peace and human fraternity values.” He further added, “Keenness to maintain the highest level of impartiality and integrity of the Judging Committee is an essential approach of the HCHF. To this end, the HCHF will provide all needed support for the Judging Committee members so that the award will go to its worthy recipient(s) who are an example and a source of inspiration to others to embrace peace and embody human fraternity values.”

The 2021 Zayed Award for Human Fraternity honorees were United Nations Secretary-General António Guterres and Latifa Ibn Ziaten, founder of the IMAD Association and an activist against extremism.

The recipient(s) will be announced on February 4, 2022. Nominations can be made by qualified nominators through the official website of the Zayed Award of Human Fraternity, https://zayedaward.org/.